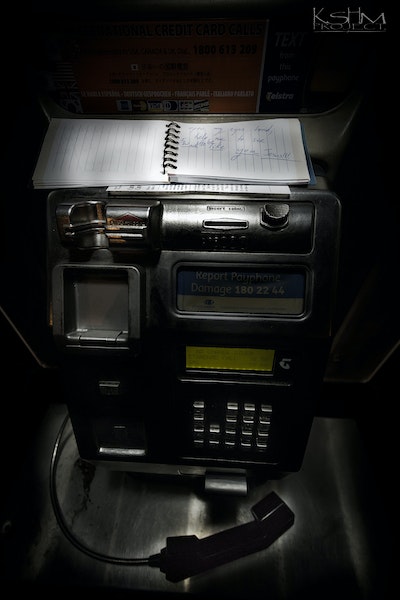 Hi everyone and welcome to Part four, The KSHM project.  This is where I threw Henry a curve ball. Usually I send a picture where a person is the subject. This is how Henry works he takes the emotions and body language into play and creates the story. In this image all Henry had to work with was the words in scribbled on the pad on top of the pay phone. This resulted in a longer than usual reply time. As it had Henry's mind stuck and wandering at the same time I feel. The outcome is a short story in stead of the a paragraph or two as in previous parts of the project.

This part of our project had me on the edge of my seat taking a whole new direction, engrossing the reader for longer. Now on with the story, enjoy!

A street in a city whose voice no longer speaks to you. Carried by the crowd of expressionless automatons, you are forced to progress forward, always forward yet without the ability to sever the links in the chain, which ties you to your past. Your entire past in this city, from the happy carefree days of your arrival to the present day and everything in between that has made this city the tomb of all your hopes. You wish you could stop and reflect in solitude, but the city does not allow idle beings in its rotten belly - you must continue to move, always forward, always farther apart from your humanity.

The crowd relentlessly carries you to an unknown destination. The past ten years, a hamster wheel from dawn until dusk. A hamster wheel without a hamster, its sides covered in discarded bones. The victims of advancement, the skeletons for which neither progress nor civilization have the time.

Time, a surreal, extravagant notion equal to a flower without roots. The concept itself deeply rooted in your conscious is no longer observed and recognized. Time has been reduced to alarm clocks, subway schedules, mandatory lunch breaks, and paydays. You recognize its passing only as events come and go, yet its very passage leaves your mind cold and unchanged while your body is making its way back to its primal, elemental state.

Like a flower without roots, it brightens its surroundings and then withers, petal by a petal until there is nothing left but a wilted stem. Your human form travels on the same, inevitable path. And while you are fully aware of what the future holds, you cannot escape the crowd and its grasp on your existence.

Your steps perfectly timed with those of the others, you progress from the business district towards the subway when, suddenly, you notice the faint light of a phone booth. You had passed here countless times, and yet your gaze had never rested on that out-of-place structure. In the age of phones carried in pockets and purses, the lone phone booth appears oddly not belonging - a relic from the bygone days when calls were scheduled and conversations had a meaning.

Meaning - you roll the word around in your mouth. At first only silently, but as you taste the syllables something inside you revolts. Something inside you, some long-forgotten foundation of morals and societies begins to rise up until you can no longer contain it within your bowels, and you feel the need to open your mouth wide and shout.

No one hears your voice, or, at least, no one notices. You muster all the strength and courage you have left, and you dig your heels in, refusing to move an inch. The automatons push pass you, their glowing screens glued to their ears. A new awakening spreads throughout your entire being and, for the first time in eons, you know what you want to do.

Parting the stream of human bodies, you push diagonally toward the phone booth. The faint light trapped inside a steel and glass cage, its green-glowing dial - an incomprehensibly comforting memory that rises like a tide ready to sweep you away. You think of the mornings spent with your family, the evening walks with your granddad, the voice of your girlfriend when you sneaked out after dark to call her from a booth similar to this one. You think of the days when interpersonal relationships meant meeting face to face and reading each other's thoughts through emotions. You think of Sunday mornings and the family trips to church.

Your fingers wrapped around the door handle, you shut the door behind you. Peace, quiet, solitude - a steel and glass island in the river of progress. Behind the glass, a world you cannot relate to - a world so full of people yet so devoid of humanity. You despise them all. But that childhood memory of Sunday mornings plays in your mind's eye.

You fish a coin out of your pocket and pick up the receiver.

"God, I want to forgive them, but I do not have the strength."

You pull a notepad, a pen, and a gun out of your briefcase.

You grab the pen and scribble onto the notepad. Open my eyes Lord, and help me to see. I want to be like you Jesus!!!

There is no answer.

The muzzle flash goes unnoticed, only the receiver falls out of your hand, and dangles by its cord.

Please see Henry's blog for the full effect as the way he has displayed it is excellence. Link below: